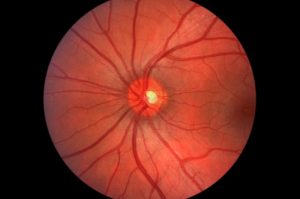 The front of the eye is constantly producing a fluid called aqueous humor.  A healthy eye will continually produce small amounts of aqueous humor to ensure consistent pressure within the eye.  When normal drainage becomes slowed or blocked, pressure increases, and may lead to glaucoma.  There are several different types of glaucoma the two most common types being open-angle glaucoma and closed-angle glaucoma.

Open-angle glaucoma is the most common form of the disease and is more common with advancing age.  With this type of glaucoma, pressure gradually increases in the eye causing progressive damage to the optic nerve over a period of time.  There are no symptoms in the early stages of open-angle glaucoma – hence the colloquial term “silent blindness”.  Peripheral vision is usually the first to deteriorate.  As the disease becomes more advanced, blank spots begin to appear in one’s vision.  If left untreated, it eventually develops to blindness.  The best way to avoid serious vision loss is early diagnosis and treatment.

Closed-angle glaucoma is less prevalent, but is considered an eye emergency.  This type of glaucoma occurs when a patient’s iris (the colorful part of the eye) moves or dilates and actually blocks off the drainage channels in the eye.  This is considered a medical emergency in which an ophthalmologist should be contacted immediately to avoid any loss of vision.

Symptoms of closed-angle glaucoma include:

There are a wide range of treatments for the disease, including medication, laser surgery and incisional surgery.  The treatment (or combination of treatments) for an individual is chosen based upon the type of glaucoma and other details of the particular case.  One option is medication such as prescription eye drops which help to reduce intraocular pressure, or pills called carbonic anhydrase inhibitors which slow down fluid production within the eye.

Laser surgery has also become a common treatment option for glaucoma.  For open-angle glaucoma the doctor may consider a trabeculoplasty, a painless laser procedure which uses light to shrink and stretch eye tissue to allow more drainage of fluid.  Cyclophotocoagulation is another non-invasive laser procedure that can reduce production of fluid, thereby lowering eye pressure. Dr. Reddy is the first Northshore surgeon to utilize the Iridex laser for cyclophotocoagulation.

For closed-angle cases, in which the iris is blocking drainage of aqueous humor, a laser surgery called iridotomy may be performed.

Other glaucoma treatment options involve various traditional surgeries.  A common surgery for open-angle glaucoma is the trabeculectomy or aqueous drainage implants, where a doctor creates a small flap in the sclera (white part of the eye).  Underneath the surface of the sclera, the doctor creates a small reservoir, called a filtration bleb, into which aqueous fluid may drain and then be disbursed, further reducing intraocular pressure.

Newer surgical options include canaloplasty, trabeculotomy and drainage stents with devices such as the OMNI, Kahook blade and iStent. Dr. Reddy was the first Northshore surgeon to utilize the OMNI and iStents.

There are a number of treatments available for Glaucoma patients.  If diagnosed with glaucoma, your ophthalmologist will consult with you on your options in order to maintain the best possible health of your eyes.

If you are experiencing any symptoms of glaucoma, we encourage you to contact us today to schedule a consultation.

Get In Touch With Us Today